I have been lugging around technical books for the last 20+ years as part of my profession. The pace with which technology changes means there is a constant stream of new topics to study and that usually means buying books. The thing about many of these technology books is you don’t read them like a pleasure book. You tend to use them as a reference while you climb a new learning curve. It goes kind of like this:

The end result is that my garage is always full of books that either describe out of date technology or are still current but not relavent for the projects I am working on at the moment. Worst still, the books I am currently using usually end up weighing many pounds and take up a lot of room. 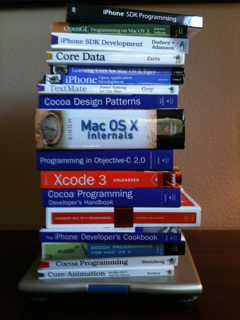 The difference between carrying around a bunch of paper books and an e-book reader is huge. This stack of books weighs in at 31.8 lbs. Compare that with an iPad that has most of the same books loaded onto it and weights just 1.8 lbs. I know which one I am going to be carrying in my backpack.

Early last year when Amazon released the Kindle2 I purchased one hoping to get rid of this problem by switching to e-books instead of paper books. I did a survey of the technical e-books available and it looked promising. Most of the books I was either currently using or would likely be interested in were now available from Amazon in an e-book version. Amazon made it possible for the Kindle to also read the mobi format so that meant I could also get books from The Pragmatic Programmer and O’Reilly.

You know what they say about the best laid plans and all that. The Kindle worked as advertised. I switched almost exclusively to e-books on the Kindle. The problem was, many of these technical books include figures or illustrations that are in color and the Kindle did an awfull job of displaying them. To make matters worse, you couldn’t change the orientation of the Kindle (no landscape mode) so images that didn’t scale well could not be viewed by rotating the device. This was almost enough for me to go back to paper books.

Flash forward about a year and the rumors were flying about Apple building a tablet/slate of some sort. Would it be a book reader, a netbook computer, a movie viewer or what? No one knew for sure but everyone was speculating. Then the announcement came that Apple would hold a special event to announce “Something they have been working on”. My Kindle2 went up on craigslist that day (about a week before the special event was held) and I sold it the next day. I love craigslist; it just works! The ironic part is I sold it to a software engineer who works for Apple.

We all know what happened next. Steve told us all what we needed (an iPad) and when we would be giving him our money. I listened, reserved one for pickup on the release day and the rest is history. Apple ships the iPad with an e-book reader called iBooks and they have an on-line bookstore where you can purchase e-books. Amazon shipped a Kindle reader for the iPad that uses wifi to sync with the Kindle on-line bookstore.

Here is a picture of my new 1.8 lb iPad that makes an excellent technical book reader. 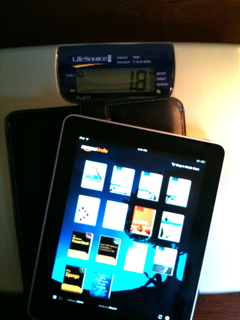 Publishers sell their e-books in one or more of the following formats:

As an aside, everyone should make their e-books available like the folks at PragProg do. When you buy a book from them you get it in three formats (PDF, mobi and epub). This means you can read your book on basically any electronic device of your choosing. O’Reilly is almost as good.

To round things out here are a couple pictures of the user interface of iBooks and Kindle Reader for iPad.

This first two images are of the iBooks software. The image on the left illustrates the support for color and the nice page turn animations help you forget that this is not paper after a while. As is typical of most Apple user interfaces, this one has excellent usability. On the right you have a look at the search feature as implemented in the iBooks application. I have found that it works well, but is a bit slow. I would like to see Apple improve on the performance in an update. 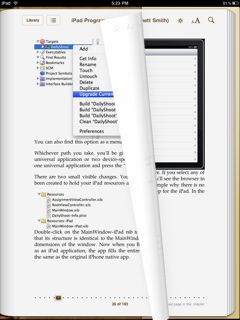 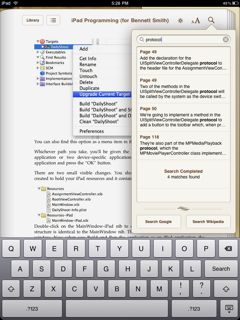 The next image is of the Amazon Kindle for iPad software. Here I am showing you what the controls are like for selecting a font size and adjusting the background color and brightness. As I mentioned earlier, the main thing missing from the Kindle software is a search feature. 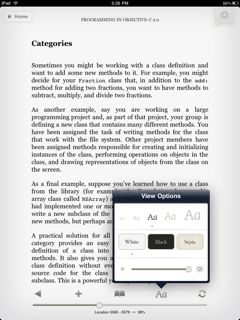 I would really like to have all my e-books in a single reader. Being forced to keep some in iBooks and others in the Kindle application really sucks, but I’m not holding my breath for a solution anytime soon.

If you don’t have an iPad yet, run (don’t walk) to your nearest Apple store and pick one up. You won’t regret it.